Last weekend, I drove up to the Twin Cities to spend time with my boyfriend Tony, his siblings and their family. The drive from the Milwaukee area was uneventful and passed quickly, probably because I was excited to see everyone.  I hadn’t seen them since Christmas time, so it was a highly anticipated event. (Not to mention it was also the time Tony and I would celebrate Valentine’s Day.) 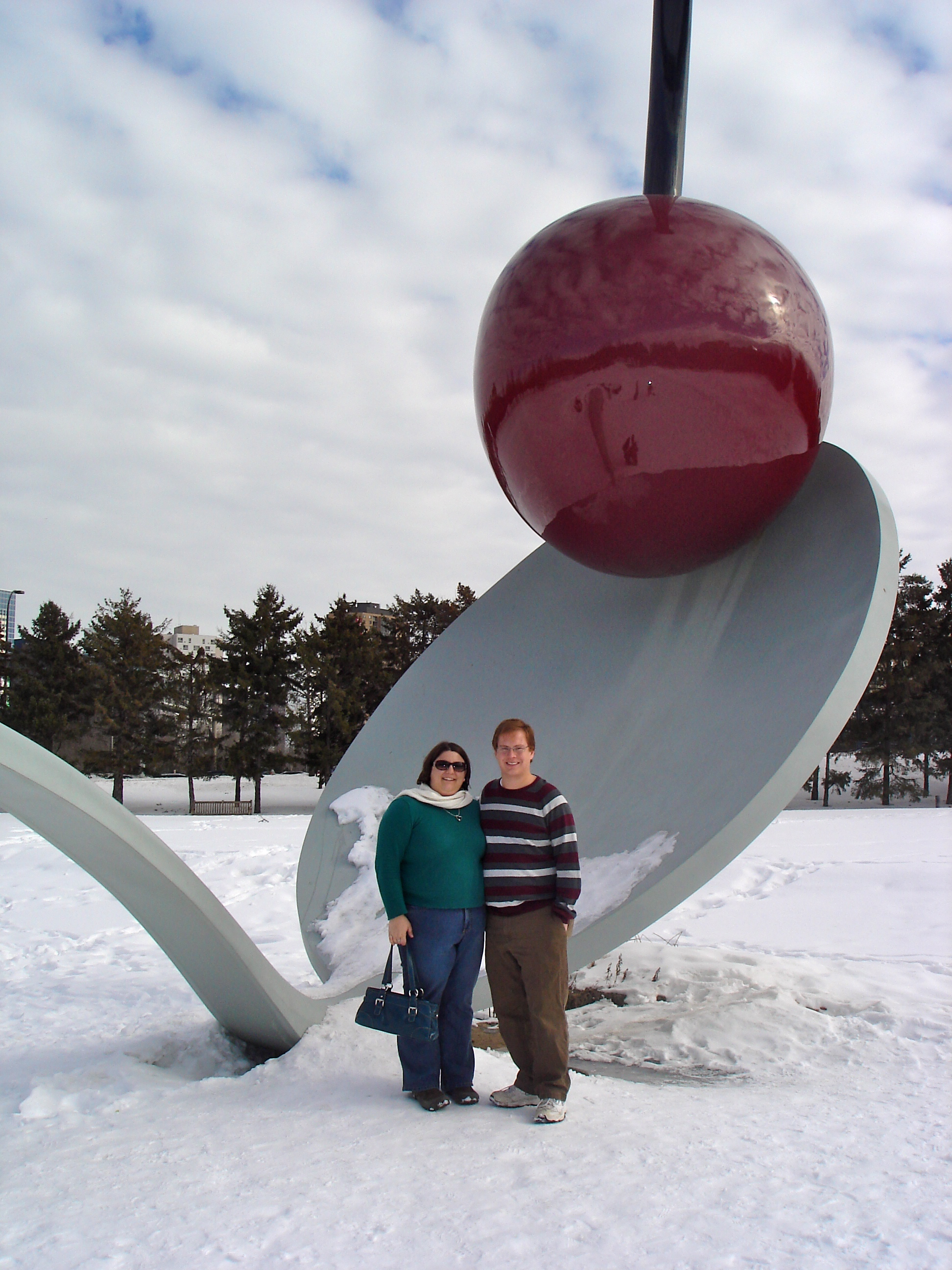 Tony and I at the Sculpture Garden

The most exciting part of the weekend for me was going to the Minneapolis Sculpture Garden.  After driving on I-94 so many times getting just a glance at “Spoonbridge with Cherry,” I wanted to see it and not just take a glance while I attempted to pay attention to the freeway at the same time. When we walked into the park (which has a totally free admission price – the best!) we saw another couple standing by the Spoonbridge taking pictures of themselves.  Since I’m such an introverted person, I drug Tony over to them and asked if they would like me to take a picture for them, and then they could take our picture.  So, happy couple, whoever you are, I hope the picture I took of you turned out really well!

We walked through the rest of the park, following well-tread paths through the snow.  It was just a beautiful day! The temperature was warm enough to walk around without a jacket for a while.  I’m very glad the snow wasn’t melting too much, otherwise it would have been messy. Tony spent the time spinning tales of what each sculpture was supposed to mean. (Or, the pretend version anyway.) It was glorious.

Among the other things we did were a rousing game of Trivial Pursuit (Pop Culture), filling lunch at Romano’s Macaroni Grill and dinner with my parents (who also happened to be in the Cities at the time) at Red Robin. There was also a trip to Target and to Hot Comics & Collectables (which was a pretty neat store!).

Things are going really well for us! I can’t wait for the “someday” to come!

In other life-news, I’m still deliberating The Call.  I believe the congregation that sent me the call is announcing it at their weekend services, so I hope I get some good phone calls or emails with information about their congregation.

I was also supposed to be starting half-marathon training for the Wisconsin Half-Marathon this week. Key word: supposed. There have been extra meetings which brought extra workload and extra craziness into my life.  Beyond teaching, I have a presentation for our district teachers’ conference and we are again starting the accreditation process at our school, which is going to be hours of analyzing data and making recommendations to the principal and Board of Education. Oh, and I’m starting my first online class for my masters degree on Monday. Life is crazy, but it’s great!

Keep a song in your heart!

4 thoughts on “A Wonderful Weekend”