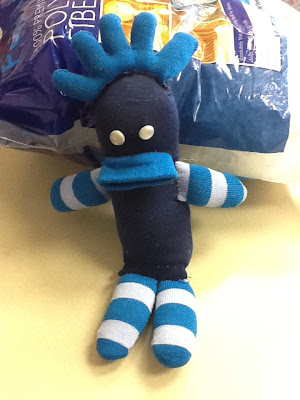 Our art project before Christmas time was one of the most non-traditional art projects I’ve done in my teaching career. (Definitely not a bad thing!)

We learned a skill that has, in my opinion, declined quite rapidly in today’s society.

First, we practiced on some scrap pieces of fabric. We threaded our needles, tied the thread, and began to do simple stitching. Next, we learned how to sew on a shank button. Some of us also decided to practice on more traditional buttons with two or four holes.

Once we got the basics down, we got on with our actual project: a sock monster!

Out of one sock, we cut arms, legs, and a mouth. The other sock became the torso of our monster.

After a couple weeks of sewing, our finished products emerged. The neat thing about this unit was that it was done using Skype with a guest teacher: my friend Rini, who is the manager of Project: Give! where she makes many sock monsters and donates them to children in hospitals and to anyone who may need a smile on their face.

Take a look at our finished products at Picasa (click)!